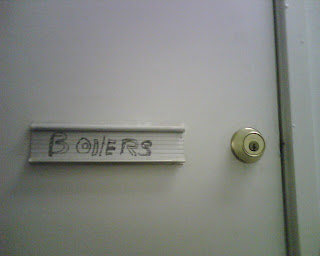 I caught a couple of great shows the past two days. Wednesday night, I went to see Son Volt at The Continental Club. For those who are not familiar with the band, Jay Farrar the lead singer/song writer, was previously in Uncle Tupelo (forefathers of the "No Depression"/alt-country genre) and one of my favorite bands - Wilco. There was a bit of a falling out between him and Jeff Tweedy during the recording of the epic "Yankee Hotel Foxtrot" album and Son Volt was born. Son Volt put on a great show. Their lead guitar player was a virtuoso, playing flawlessly with perfect tone.

Bobby Bare Jr opened. I hadn't heard of him previously but really liked his songs. The bass player was hilarious. He had on a "Daniel-san" like headband and danced around like he was playing butt rock rather than sensitive alt-country. He cracked me up when he asked for "more mustache" in the monitors!

Last night, I had the pleasure of experiencing Negativland at Rice's Aurora Picture Show after a friend invited me to check it out. The show can best be described as a fictional radio show examining religion. The show was titled "It's All In Your Head" and posits that religion, like everything else, is man made. By design, it is intended to make listeners question their beliefs and compare/contrast them with other religions. To enhance the listening experience, the audience was given a colorful piñata blindfold and invited to wear it throughout the show. I took their suggestion and zoned out a bit as I soaked up the chaotic sound collage they created live on stage. One of the members of the group said no computers were used to produce the show, just an array of electronics equipment including samplers, turntables, and other "complicated devices". This was very different than anything I'd ever been to but I thoroughly enjoyed it.

Before the show, we wandered around the Rice campus a bit until we found Valhalla, an on-campus bar run by grad students. The beer was ridiculously cheap. I drank St. Arnold Bock for $1.15 a glass. I'll always love the Gingerman, but I may have found another option when in that area. The campus was beautiful. I'd never been there, but walking around made me want to go back to school again. Maybe someday soon. The whole studying thing doesn't appeal to me at the moment.

I'm supposed to be working now, so I'd better wrap this up. I've included a picture I took in a friend of a friend's apartment building. I think it speaks for itself.
All the cool kids are doing it Up at 6:00 am on a Saturday...