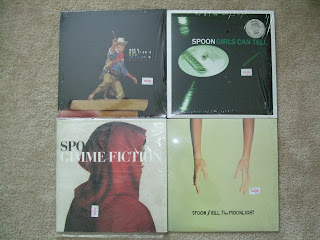 Once again, I packed a lot of fun into the weekend. Jamie and I went to the French Kicks concert at Walter's on Friday night with some friends. Houston's own Young Mammals (formerly The Dimes) opened and made me a fan almost instantly. It was my second time to see the French Kicks and they put on a great show yet again.

I took it easy Saturday. I got a humidor for some quality cigars I recently procured and then paid another visit to my music mecca, Cactus Records. There was a DJ spinning classic blues records at Cactus and Saint Arnold once again provided free beer. I sipped a beer as I flipped through the new records. I had planned to get the Spoon records I needed to complete my collection (I already had Ga Ga Ga Ga Ga and Series of Sneaks), but was also excited to find Born Ruffians' latest as well. So my collection now includes:
So other than the hard to find Telephono & Soft Effects, my Spoon vinyl collection is now complete.

I finished the weekend off with a 10 mile run at Terry Hershey park. It was my first time to run there and the rolling hills were a nice change from the flats I usually run. I averaged about 10:30/mile, which is a little slower than I'd like but I took one minute walk breaks every eight minutes to avoid wearing myself out. I finished up with 2100 calories burned, which I promptly started replacing with a Chipotle burrito and some Saint Arnold Amber. I'm beat but feeling pretty accomplished. Off to bed to now to sleep like a baby...
Shampoo for My Shaved Head & A Lesson in the Metric System Mates of State Concert & Restaurant Stuff