Since my friend Greg asked for it, here's a review of The Flaming Lips' "New Year's Eve Freakout" as their latest album, "Embryonic", spins on the turntable.

The last time I saw the Lips was in high school just after the release of "Clouds Taste Metallic". That experience and word-of-mouth since prepared me for the celebratory chaos that is a Flaming Lips show. Joe Mathlete of 29-95.com did a very entertaining set of cartoons documenting his trip to OKC for the show accurately described a Flaming Lips concert as "the biggest happiest birthday party ever, and everyone in the room is turning six".

The biggest draw for me was the fact that the Lips would be playing Pink Floyd's "Dark Side of the Moon" at midnight. The week before the concert, they released the studio version of the album. I debated for less than five minutes whether I should listen to it or wait to hear it live on New Year's. Of course, I caved and listened to it repeatedly. I love how they made it their own, even completely changing the vibe of some songs like "Breathe" so that I had to really focus to hear what my ears were used to hearing from the Floyd version. Similarly, the clocks at the beginning of "Time" and the cash register/coins sound collage at the beginning of "Money" were changed (ha ha ha, pun intended) up quite a bit. I also appreciated that Henry Rollins was tapped for the speaking parts interspersed throughout the album. For my American English trained ears, this was the first time I was able to understand some of the speaking parts without the veil of a thick British English accent. 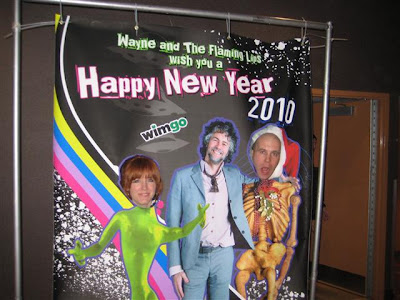 Back to the concert itself... We wisely got a room at the Renaissance Inn across the street from the convention center to avoid the need to drive anywhere. Some friends and friends of friends joined us at the hotel before the show for a little preparty. Around 10pm, we walked across the street to the convention center. The Flaming Lips had just gone on stage and proceeded to play a mixture of old and new songs including "Do You Realize?", "Convinced of the Hex", "She Don't Use Jelly", and "Yoshimi Battles the Pink Robots". 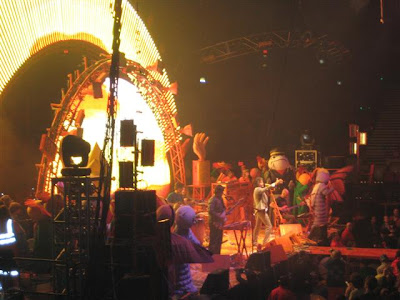 Big balloons in a variety of colors bounced among the crowd and my eyes noticed a sea of such balloons occupying the seats behind the stage. "Why aren't these balloons being enjoyed?", I wondered. I decided to do my part and throw as many of the balloons as possible into the part of the crowd where we were sitting. This was much appreciated by those around us, but was quickly interrupted by the yelling of stagehands below. It was then I realized these balloons were for midnight. My bad, dudes.

At midnight, the aforementioned idle balloons were swept into the crowd, resulting in a sea of multicolored balloons reminiscent of the ball pit at Showbiz Pizza. After (or before, I'm not sure), Wayne came out with giant hands and shot green lasers into the large hemispherical disco ball in the center of the arena. The disco ball refracted the lasers everywhere and prepared us for the Flaming Lips/Pink Floyd masterpiece we were about to witness. 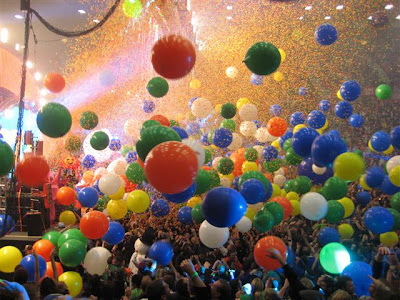 Before they started playing Dark Side, Wayne asked all of us to set the alarm on our phones for 12:55 AM with whatever sound was currently set, which was obviously when they planned to launch into "Time". No cuckoo clocks with gears and chimes in 2010; this would be interesting.

Their performance of Dark Side for the most part stuck to the studio version, but hearing it live and seeing a seemingly endless sea of costumed characters such as a whale in a captain's uniform dancing at the sides of the stage made it even better. I really enjoyed watching Steven scream the diva part from "The Great Gig in the Sky" into a distorted megaphone. The Pink Floyd version of that song always gives me chills and The Flaming Lips version is no different. I also loved when they said "And now, we begin Side 2" in the middle of the performance. Time to flip the record, kids... We were sitting on the left side of the stage and I didn't see Henry Rollins, but heard his speaking parts throughout the set. Were they using a recording of him? Maybe someone with a different vantage point can clear that up for me.

If you haven't ever listened to Pink Floyd's "Dark Side of the Moon", SHAME ON YOU! Go get a turntable, the record, and a good set of headphones. Then, let me know how wonderful it is. After 100 or more listens, treat yourself to the Flaming Lips version. Which reminds me, I still need to listen to that with headphones...

Here are a few videos:

Convinced of the Hex