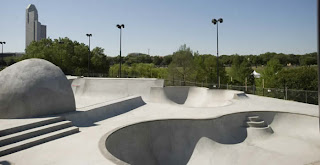 Yes, it's been over a week yet again since my last post. If I actually had some readers, this would be a bad thing. But since I don't, I guess it doesn't really matter much. If anyone does read this drivel, please leave a comment so I can feel good about myself. Actually, I don't need anyone to make me feel good about myself, but it would be nice to know you're reading this.

I, like hundreds of other people yesterday ventured out to Bayou Park for the grand opening of the Lee and Joe Jamail Skate Park. For those of you who haven't been following its construction, this is a FREE public skate park just outside of downtown. I dabbled in skateboarding back in 6th & 7th grade and still hop on my board from time to time to ride back and forth like I'm cool. I really feel like the old guy at the skate park, but the kids don't seem to mind and I try to stay out of their way. I didn't skate yesterday, and instead joined the crowd around the side of the "expert" bowl. We were treated to demos by some of the top pro skaters, most of whom I didn't recognize since I followed the sport much more closely "back in the day". But none other than Shaun White (Olympic gold medal snowboarder, aka The Flying Tomato) was there only on a skateboard. I felt very privileged to see him in action. Awesome!

In other news, Jamie and I saw the Old 97's at Meridian on Friday. They played a bunch of songs from their new album. There was even a wedding proposal on stage during the sugary sweet "Question". I'm liking their new album more and more each time I listen to it.

I also saw the new Indiana Jones movie over the weekend. It fit nicely with the others and seemed to prepare Shia LaBeouf to take on the role of Indy in the next movie. I guess we'll see. My only beef with the movie was the odd ending, but it is George Lucas, after all.

I finally managed to try some of Southern Star Brewing's beer at The Flying Saucer over the weekend. Southern Star is a new brewery up near Conroe that was started by a guy I know from my homebrew club and one of his friends. I tried their Pine Belt Pale Ale and really liked it. Hop nectar, for sure. Good luck, guys!

Back to work...
Thoughts on 30 Shampoo for My Shaved Head & A Lesson in the Metric System