Again, too long between blog posts.  My faithful readers are clammoring for more of my adventures.  Right?  Well, most likely not, but here it goes...
First, Jamie and I went to the ACL Festival in Austin about a month ago.  It was the first time to go for both of us and we saw a ton of great bands including Vampire Weekend, Bobby Bare Jr, Mates of State, Jenny Lewis, Old 97's, Jose Gonzalez, Drive-By Truckers, Cansei de ser Sexy (CSS), MGMT, Conor Oberst, and Beck.  Here's a video I took of Beck doing "Hell Yes":

Check out the rest of the videos I took here.  I managed to escape without a sunburn thanks to liberal application of SPF 50 sunscreen and a hat, but the allergies were another story.  Apparently, Austin is unofficially the allergy capital of the world.  It hit me so hard I was sneezing constantly and wishing Tylenol made a "snot buckets" formula.  But I had a blast.  I can't wait to find out who will be there next year.
Other concerts I've been to recently include Ryan Adams & The Cardinals, The Ting Tings, and Weezer.  The Ryan Adams show was at Verizon Wireless Theater.  It was my third time to see him and he's one of those artists who sounds even better live.  They played a lot of songs from their new album.  I saw The Ting Tings at the new Houston House of Blues.  I was not impressed with the place as a restaurant nor as a concert venue, but the band put on a good show.  My only criticism would be that the amount of effort the two band members put into constantly jumping between instruments and grabbing them from roadies at just the right point in the song detracted from their performance a bit.  Would it be THAT bad to add an extra member for touring?  The Weezer show was at Reliant Arena.  It was my second time to see them live.  Highlights include a note-for-note perfect performance of Pink Floyd's "Time" and about 30 local amateur musicians playing a variety of instruments (guitars, flutes, saxaphones, trumpets, tubas, hand drums, etc.) with Weezer themselves just singing for a few songs (here's Island in the Sun).  Even funnier was Rivers pointing to a couple people to play the solos in the songs.
I'm going to see Of Montreal on Tuesday night.  They were amazing when I saw them the first time last year, so it should be another good show.  Their new album is a bit schizophrenic, but who really wants to listen to a band who becomes formulaic and fails to evolve?  Speaking of new music, I grabbed the new Ryan Adams on vinyl (complete with a bonus 7" and alternate cover art) last night.  And I can't get Matt & Kim's new song "Daylight" out of my head.  It's perfect to crank up while driving around with the windows down and sunroof open this time of year.
The guys from Guest Room Records in Oklahoma City/Norman have a podcast called "Shoes Are for Work".  They play about 10 indie rock songs in each episode and discuss new releases.  I highly recommend it if you're a music freak like I am.
And now, the running update.  My marathon training has been going well since I picked up some SLS Compression Sox (AKA dork socks) a little over a month ago.  My calves/feet are a lot less sore after running with them and they make longer runs much easier.  Props to Brett for mentioning these on his Zen & The Art of Triathlon podcast.  I've also taken his suggestion of doing 10 pushups for every mile on my shorter runs.  Running six miles and doing 60 pushups in less than an hour is manly.  I dare you to say otherwise.
I did a 20 mile run a couple weekends ago in about 3:30 and burned 3919 calories (that's more than a pound!) along the way: 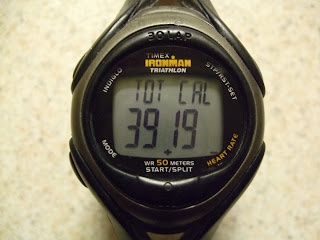 That was a semi-relaxed pace, so hopefully I can finish the San Antonio Rock N Roll Marathon next weekend in 4:15-4:30.  Since this will be my first marathon, I'm trying not to be too concerned about the time.
I guess that's enough for this variety pack of the life and times of Andy.  Maybe I should post more often so each entry can have a topic and a meaningful title.  Hmmm...something to consider...
Ohhhhhhklahoma! Where the wind comes sweepin' down the plain... Happiness is a byproduct